Thorne at the Stereo Society

Thorne at the Stereo Society

From The Billboard Encyclopedia

The Billboard Encyclopedia of Record Producers was written and edited
by Eric Olsen, Paul Verna and Carlo Wolff

Mike Thorne was born in Sunderland, in the north of England, in 1948.   Thorne began formal classical piano lessons at the age of 10, which he continued for eight years.   Gradually Thorne came to appreciate the music over which he was laboring, and by his mid-teens he was enthusiastically playing

difficult 20th Century composers such as Schoenberg and Messiaen.   While he was a committed musician, Thorne also excelled scholastically, and received his BA from Oxford in physics in ’69.

Though when he left for Oxford he ‘barely knew the names of the Beatles,’ while there Thorne became a pop fan, discovering ‘all of this fun music, especially the harder stuff: Stones, Doors, anything with a bit of muscle.   I like music to be confrontational, intense.   My interest has been about 50/50 classical and pop ever since.   I’ve always liked music left-of-center.   It’s a double-edged sword: most of the time it will disappear because the record companies don’t put their marketing weight behind it, but the other side is that if something left of center goes, it goes all the way like Tainted Love,’ he says.

While in college Thorne made party tapes and set up the sound systems to play them on – a hardware and software man.   When he returned home after Oxford, Thorne decided to ‘do it right’ and built a mobile DJ system and light show from scratch, which he then took down to London and operated as ‘Heavy Henry’ (‘heavy’ for the music, hard rock and soul; ‘henry’ for an electrical unit of inductance) – ’15 guineas, extra after 2am’ – which he operated three nights a week from ’69 until ’73.

In ’70 Thorne got a job as tea boy, then assistant engineer, at De Lane Lea Music, ‘a tough, dirty rock ‘n’ roll studio in London,’ where he worked on sessions for Fleetwood Mac and Deep Purple.   Thorne left the studio in ’71, then joined Hi-Fi News & Record Review in ’72, where he wrote classical and pop record reviews.   At the same time Thorne studied music composition with noted composer Buxton Orr at the Guildhall School of Music and Drama.   From ’74 to ’76 Thorne was editor of Studio Sound, which he helped develop from a hobbyist UK publication into a professional magazine with worldwide distribution.

Deciding he would rather do it than write about it, Thorne decided to pursue an A&R position and was hired by EMI in March of ’76.   Among his charges were the Sex Pistols and Kate Bush.   ‘I didn’t know how I was supposed to behave.   Instead of hanging around with other A&R people, I was bumping around the streets seeing all this fun new stuff, this energetic music – punk – which is really just pop music with a little bit of a point and a lot of edge.   It was still a small scene: you’d go to the Roxy and the Marquee in London, or to CBGB’s and Max’s Kansas City in New York and you’d hear about everything that was going on.’ In the course of his travels several bands asked Thorne to produce them.   ‘I said no because making a record deals with people’s personal intensities (or at least the records I care to make) and is not like processing canned peas.   That was too much responsibility.   But I looked around and said, ‘I can do it better than most of these Herberts.’ Off I went.’ 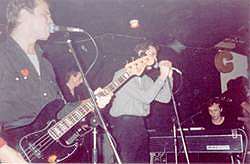 from the Roxy recordings and he was the first to take them into the studio.   ‘When we went in the first day [for Pink Flag] I took a jar of home-grown just so they could settle into the studio.   I didn’t want them to get precious and to put the pressure on the first day.   Everybody got completely ripped and the studio fear was gone after that,’ he says.   The band played all of the album’s 21 songs live in the studio.

With the success of his productions, Thorne became staff producer at EMI in addition to his A&R duties.   In ’78 and ’79 Thorne did two more Wire albums, Chairs Missing and 154, which he played keyboards on as well as produced.   He also played live with the band, which was difficult: ‘They played things twice as fast live, and I am no way a virtuoso,’ he chuckles.   By 154 in ’79 Wire had evolved musically (or had become bored with punk minimalism) and were adding a languid, melodic element to the mix (that sound became predominant when the band reunited after five years in the mid-’80s, especially on A Bell is a Cup…Until it Is Struck).   ‘There was an incredible step up in their playing capabilities when we went into 154,‘ Thorne said in a ’96 interview with Kevin Eden.   ‘When Wire [had] played the songs in the studio it was generally getting the cheese-grater guitars and jangly bashy noises right, so if you take out all of that it leaves a big gap, which has to be filled.   And it was filled very creatively.   We experimented with the whole studio,’ he said.   ‘I still think it’s an exceptional album and it still amazes me…just how unique it sounds,’ he said.

After 154 Thorne left EMI and moved to New York to become an independent producer, working predominantly out of the Media Sound studio.   Thorne purchased one of the first Synclaviers (the computer synthesizer built in Vermont by the New England Digital Company – after NED’s crash in ’92, Thorne was a director of the new Synclavier Company for a time), which he has used on many a production.   In ’80 he produced albums for former Wire leader Colin Newman, John Cale, and Soft Machine, but in ’81 he hit the commercial jackpot with technopop’s biggest hit ever, Soft Cell’s Tainted Love (#1 UK, US Hot 100 for almost a year) from their Non-Stop Erotic Cabaret (#5 UK) album.

but lingers in an increasingly fetid, yet still alluring state.   It is ironic that the song hit just before the world became aware of a byproduct of literally tainted love, AIDS.   Even better than the album and single version is the 12″ medley with Where Did Our Love Go?, a poignant coda that finds Almond pleading for release in an ever-diminishing voice from the exquisite torture of his predicament.   Thorne produced four more Top 10 UK   singles, and two Top 10 UK   albums for the duo, though none connected quite like the archetypal Tainted Love.

Thorne worked with Nina Hagen, The The, and Hilly Kristal (owner of CBGB’s) in ’82 and ’83 before hitting again in a big way with another technopop unit – this one a trio – Bronski Beat.   Bronski Beat (Jimmy Somerville – vocals, Steve Bronski and Larry Steinbachek – keyboards) achieved an extremely rare feat on the classic Thorne-produced album The Age Of Consent (#4 UK): an overtly political gay manifesto that is never shrill, accusatory, or intentionally off-putting (other than perhaps Need A Man Blues), but is instead warm, emotionally inclusive and musically amazing.   Lyricist Jimmy Somerville emphasizes not the ‘otherness’ of gays, but the emotional needs of all kinds of outcasts on originals Smalltown Boy (#3 UK), Why?(#6 UK), a smoky version of the Gershwin’s It Ain’t Necessarily So (#16 UK), and a remake of Donna Summer’s disco classic I Feel Love (with Marc Almond – #3 UK).   Thorne’s production is supple yet tough and Somerville’s falsetto is a force of nature.   Since then, Thorne has produced the great poppy new wave of Aimee Mann’s ’til Tuesday (Voices Carry – #8), Somerville’s Communards (the great Disenchanted, Don’t Leave Me This Way– #1 UK, So Cold the Night – #8 UK), Roger Daltrey, Siouxsie and the Banshees, China Crisis, Laurie Anderson, Blur, Peter Murphy, and Information Society.

Thorne also built his own studio, the Stereo Society, which has evolved since its inception in ’86 into what Thorne calls ‘one of the most powerful music rooms in the world.’ A man whose life has been steeped in technology, Thorne has strong opinions on the subject: ‘Technology is a good servant but a bad master.   Technology should be at the service of the person, not the other way round. 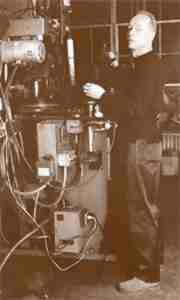 Too much music is driven by technology and the process: the fingers do the walking, not the soul.   But if we control technology, we find new means of expression, new ways of waking people up.   That funny area where you sense something new but know we have to build on some cultural past, is, for me, the best hangout.   Technology is developing increasingly quickly.   It’s always a balance of terror between what’s possible and what we actually do with it.   Because technology gives us many new things to learn and assimilate, we can easily slip behind and sound dated unless we lean on instinct at least as much as the User Manual.   There are so many new possibilities coming at us that it’s hard to sit and think quietly in a corner: so much noise can drive us catatonic.   And let’s not forget those analog computers from Gibson and Steinway,’ he says.

Thorne is now embarking upon a new technological venture – in March of ’99 he is releasing four CDs through the Stereo Society and a new web site www.stereosociety.com: his own first album done in an edgy electronic manner, but with the Uptown Horns a central part of the sound – integral vocalists include Kit Hain, Sarah Jane Morris, and Lene Lovich; a Hilly Kristal album called Mad Mordechai; an album by Philadelphia synth-and-guitar duo the Reds (an 80s-prominent forceful and aggressive band for which Thorne is the electronic rhythm section) called Cry Tomorrow; and an album by the ‘oddly compelling microtonal composer and bassoon virtuoso’ from Brooklyn, Johnny Reinhard.   Thorne is also writing Music In the Machine, a book touching upon his many enthusiasms, which will also be available through the deep, ambitious site.