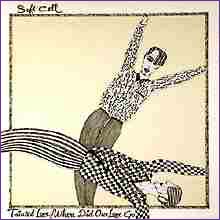 Tainted Love, written for her by Ed Cobb, was a hit first for Gloria Jones in the sixties, and was clearly a persistent one in some people’s minds back then.  She re-recorded it in 1975 for her EMI album Vixen, co-produced with her husband Marc Bolan just before she drove into the late-night disaster on Barnes Common, in West London, that killed him.  By the late seventies, it had become a club staple on the English ‘northern soul’ circuit, which is where Soft Cell, two sharp occasional-DJ art students living in Leeds, embraced it.

The duo had already released an accomplished synthesizer dance record which was doing well on the esoteric circuit (Memorabilia, produced by Daniel Miller of Warm Leatherette fame, now head of his own Mute Records label).  They had been re-signed to Phonogram Records from the Some Bizzare label (persistent misspelling by accident) of their to-be long-term manager Steve O/Stevo, as part of a collection of quick signings by him, after participating in a small, intense festival of progressive and electronic bands.  The first album on the Some Bizzare label had been a compilation of these bands’ tracks, a patchy effort but now a real collector’s item.

Live, Soft Cell used a Revox stereo tape recorder for audio backing, with Dave Ball playing an additional two-octave bass synthesizer whose thick, antique sound would prove to work well on all the records we made together.  Marc Almond sang on any small stage that contained their one big portable prop, a padded cell for occasional repose.  They had a small, growing following both live and in the DJ clubs.

I was contacted by Phonogram Records to produce a quick, cheap single.  When I spoke to the group first in Leeds on the phone from London, there was no real discussion about whether the working relationship was in place or what had to be developed or how we could settle in socially.  We discussed basic issues on the phone and arranged the session accordingly.  The rough demo had a very basic but distinctive attitude and what sounded like a beautiful, passionately handled vocal sensibility.  The production needs seemed clear, although there was much detailed development to be done in double-quick time.

For economy’s sake, I was producing two Some Bizzare/Phonogram artists back-to-back.  Although it was eating into my sleep, this arrangement gave each artist time to sit back and reflect, especially important for a first studio encounter (when the process can seem to move too fast and you can  subsequently feel as if you were railroaded into things you might not have liked had you been allowed to think through more fully).  The other project was a second single for B-Movie, Marilyn Dreams, following up our modest but noticeable hit of Remembrance Day.

Stevo was always an aspiring emperor, and not always with smooth social grace.  He showed up unannounced on B-Movie’s sessions to introduce Soft Cell.  This didn’t seem a way to make individual artists feel as if their particular style and needs were being given special attention and that nothing else mattered but the making of their record.  However, these two characters at the back of the control room in their coordinated raincoats and hats were not to be ignored.  Even then, fresh off the train from Leeds, they had a real aura about them.

Setting up for the session meant borrowing.  Their drum machine was broken, they said.  I borrowed Kit Hain’s primitive Roland, noting that a bit of proxy star quality on the session wouldn’t hurt.  It had one output only.  The only way that engineer Paul Hardiman could separate the kick drum from the tinny electronic noise burst that functioned as the snare sound was by using equalization and recording them on different tracks.  The danceability didn’t seem to be compromised, though.  My Synclavier, the sixth unit  to be made of this first commercially-available digital synthesizer, was in London for a film score I was making, Memoirs Of A Survivor (directed by David Gladwell, starring Julie Christie, after the book by Doris Lessing).  This remarkable and rather large computer instrument made the distinctive piano rhythm sounds, the orchestral swells, the big French horn sound in the middle of the club 12″ and more besides.  It was convenient that I had spent the previous month in London developing compositions, arrangements and particularly novel sounds for this movie.  An assortment of electronic drums, mine and the group’s, made their own basic sounds, although in one case (the opening ‘bink bink’), a snare-ish noise was mangled through a distinctive delay line (Delta Labs’ DL4) to generate the metallic ringing which became such a signature and has since gone on to occupy so many other people’s sample machines.

The sessions were spread out to give sufficient breathing and thinking space.  A day and a half (separated by a break for the group but not for me) was allowed for recording, and a day for mixing the long nine-minute segué into Where Did Our Love Go and the related B side, an instrumental version to be called Tainted Dub.  It was one of those dream sessions where everything worked.  Everything we reached for seemed to fit effortlessly, whether it was the surprisingly effective horn sustain in the middle or the classic ‘bink’.  Time passed very pleasantly, and very energetically.

We went for a run-through of Marc’s lead vocal before the sound was fully checked and settled.  Experience shows it’s always advisable to record the run-through. He let rip first time and that became the lead vocal on the final record without any adjustment, the performance holding its own against later, more deliberate attempts.  It’s compressed far more than the rule books say it should be, but it sounds marvelous.  A few extra backing vocals, some premeditated and some invented on the session, and we were done recording.

The mixing sessions were also a pleasure, aside from the 3am finish (remember, for me this was the second of two parallel projects).  Although the track was long, most of the mixing and effects generation was done in real time.  It was almost a theatre piece: lunging across the room to tweak a sound as the tape was whizzing by.  You might think it set up for some gallery of performance art if you were looking on.  I remember so clearly our focusing on the mix and then suddenly noticing that all of us in the control room were dancing as we were working on our feet, completely spontaneously and without being aware of it.

Tainted Dub was mixed in similarly spontaneous fashion, several pairs of arms flailing to manipulate effects as the track sped by.  Relaxing after the session, we were thinking that we ‘have done something good enough to reach the Top 50 . . . . er haven’t we?’  It felt pretty fine, anyway.  We had accomplished something, we thought.

The 7″ single portion, which was embedded in the long dance version, was later remixed by Harvey Goldberg in New York (for a bigger sound and in response to the record company’s request to, of all things, lower the level of the vocals), but the joyful raucousness of that long night remained on the longer record.  And, just as strongly, in my memory.

The record’s commercial story is well enough known: number one in 17 territories, the biggest seller of the year in the UK, and setting the record for the longest stay by a single in the US Billboard Hot 100 chart (43 weeks).  In one of those unlikely coincidences, over a year later my to-be wife Leila and I ran into Stevo and the group at the Camden Palace, an up market London club in a former BBC theater, the same night that the Billboard record was declared.  More champagne and shock.

Nothing had prepared any of us for such a level of commercial success.  The group were completely swept away, and even at my advanced age of 33 it felt almost out of control.  Even I would get goofy, giggly phone calls at home, and the group could barely walk down the street without provoking a mob scene.  At home in Leeds, they had to endure a state of siege, between being shouted at and having their household garbage set alight in the back lane.  A meeting in the lounge of the modest Leeds hotel where I was staying while visiting to discuss the album had to adjourn quickly to my room because of the points, stares and well-meaning social interruptions.  The two of them soon moved to London and achieved a little more privacy.

Every few years, the record will surface in the charts again, courtesy of another Greatest Hits album promotion or a Levi’s television commercial.  Suddenly, 18 years later, (March 13 1999) the era in general and the group in particular merited 90 minutes of English prime-time documentary, and I found myself performing as a television talking head speaking about distant history which might as well be around the time of William the Conqueror.  It’s hard to know how to react when such old bones are dug up.  It’s better if the world moves on, but then it’s always nice to be appreciated.  And the pension helps.