Sarah Jane Morris: A Chronology to 1998

1980
After studying drama at Stratford-on-Avon in her teens, and quitting the Central School of Speech and Drama (Swiss Cottage, London) half way through its three-year course, Sarah Jane teams up with a jazz pianist who introduces her to jazz and blues.  In search of an Equity card, she performs at gigs in Northern clubs and restaurants.  Seeing advertisements in The Stage and Melody Maker ‘seeking a singer for an Italian blues band’, Sarah Jane auditions, is chosen, and departs for Florence.  The band is called ‘Panama’, later to be changed to ‘Wop Avenue’. After a matter of months Sarah Jane leaves the band and returns to England.

1981
Sarah Jane teams up with Mitch Brins to perform his three-hander musical Hollywood Dreams, based on the scandalous book Hollywood Babylon, at the Edinburgh Festival. The musical wins an Edinburgh first and transfers to The Latchmere in London.

The two singers are spotted singing in a Chalk Farm wine bar by Annie Lenox and Dave Stewart and are asked to come and sing backing vocals on their first single, Into The Garden. In return, Dave Stewart recorded the songs for the musical in his studio in a church, also in Chalk Farm. 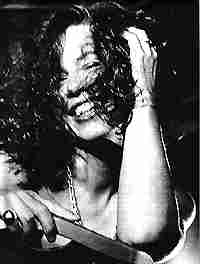 Supporting herself by making and selling clothes in Camden Lock, Sarah Jane joins the African-Caribbean-Latin band ‘The Republic’, as the lead singer.  With enormous publicity from the music press and a documentary for Granada TV, they are hailed as the band ‘going to happen.’ Among their releases are One Chance, Don’t Believe It’s In Your Interest, and My Spies. The band is deemed too political for radio play, with the honorable exception of Capitol Radio.  Success didn’t follow and they split up in 1984.

1984
Sarah Jane joins ‘The Happy End’, a twenty-one piece big band formed in 1983, specialising in the music of Brecht and Weill. She will remain as their vocalist until 1989. The band releases two albums, There’s Nothing Quite Like Money for Circus Records, and Resolution for Cooking Vinyl.

1985
Late in the year, Sarah Jane suggests to friend Richard Coles and his musical partner, Jimmy Somerville, whom she has met at a miners’ benefit with The Happy End, that they perform Billie Holliday’s Lover Man at a gay fundraising event at The Fridge in Briton. The response is enormous. The trio are watched by London Records in the audience and Sarah Jane is eventually asked to fly to New York to record two lead vocals on the Communards’debut album.  Enter Mike Thorne, successful young producer with a string of hits behind him.  This musical meeting leads to a long friendship with both Mike and his wife Leila.

1986
In January, Sarah Jane appears with The Communards, Paul Weller (who will later write Leaves Around The Door for her), and Billy Bragg at seven UK dates with ‘The Red Wedge’ in support of the Labour Party. She takes part in the recording of A Good Night Out With The Band by Test Department.

In February, Sarah Jane goes to India with the Annie Whitehead Band, who are signed to Virgin Records. They play eight dates all across India with Jan Gaibarcek, Stefan Grapelli, and Max Roach.

In September, the Communards’ revival of the Gamble and Huff hit (originally sung on separate UK hit records by Harold Melvin and Thelma Houston).  Don’t Leave Me This Waytops the charts for five weeks and becomes the biggest selling single of the year.  The album, The Communards, reaches Number 7 in the UK album charts.  A nationwide and European tour follows, including notable concerts at the Royal Albert Hall and Wembly Arena.

1987
After extensive touring in the US, she splits from The Communards, who disband within a year.  She features on the album A Year Has Many Days, by Richenel, a Dutch singer signed to Sony Records.

Sarah Jane gives an acclaimed performance in the play The Sleep in Glasgow, Brighton and finally London’s Riverside Studios. The Sleep is directed by Peter Brookes from Impact Theatre.  Antonia Bird, a BBC TV director, sees Sarah Jane at The Riverside and offers her a part in her first TV series,  Thin Air.

1988
April marks Sarah Jane’s TV acting career debut in the Sport TV series Thin Air.  Soon afterwards she begins solo performing, signing a deal with Jive Records.  She writes her first song, Cry, with Alastair Gavin.  An EP and her first single, Can’t Get To Sleep Without You, are released in the summer.

Success in Europe beckons with a tour supporting Simply Red (she is voted the top female vocalist in Italy’s Rockstar magazine) and receives the prestigious prize of the keys to the city of Verona while performing at the Verona Arena.

Steve White, having met Sarah Jane at ‘The Red Wedge’ tour (where he was drumming for Paul Weller), invites her to add vocals on a project for the Jazz Renegades, and the band produce Motter of the Future for the Illicit Grooves album for Acid Jazz Records.  Sarah Jane also records Do It The Hard Way for their debut album, Freedom Samba, on Polydor records.

1990
Having left Jive Records and parted company with her management company (thanks to their going bankrupt), Sarah Jane is asked by Steve White to contribute a song to another Acid Jazz album.  Written in a day, the result is A Certain Kind of Freedom. She appears at an anti-poll tax benefit to record the single, Carry On in Germany.  Sarah Jane performs for the Italian prime minister and an invited audience at the Venice Opera House.

1991
While appearing as Lucy Lockett in The Beggars Opera at The Royal Exchange Theatre (which earns her a best supporting actress nomination) she is approached to write and perform a song for the San Remo Song Festival.  She wins with her composition, I’m Missing You, which hits Number 2 in Italy and becomes the first of two Number 1 records  for her in Greece.

Steve Martland, (the English classical composer), recording a BBC documentary on his personal view of Thatcher’s Britain, enlists the creative talents of Sarah Jane.  Their collaboration results in the EP, Glad Day for Factory records.  Sarah Jane appears with Andy Bell and Lene Lovich on Peter Hamill’s gothic opera album, The Fall of the House of Usher, playing the part of the chorus.  Guest vocals follow on albums by Matt Bianco and koto player Suzuki.  She is approached by director Antonia Bird to write the theme song, I Am A Woman, for the BBC.

1992
Her second album, Heaven, is distributed across Europe (Sarah Jane has cowritten eight of the ten tracks) and tops the Italian charts. Her version of Barry White’s Never Gonna Give You Up gives her a chart topper in Spain, Greece, Italy and Japan. Two songs from the album are featured on NFVs popular detective series Cracker.

In August, she marries long-time boyfriend and fellow musician David Coulter of the Irish band The Pogues. Sarah Jane sacks her second management while on her honeymoon.

1993
Now managing herself, Sarah Jane begins to rebuild her following on the British music circuit, often joining up with her long-term friend, the award-winning actor/singer Ian Shaw.  The pair are asked to write and perform the song, It’s Up To You, featured in the Terrance Higgins Trust video.

1994
A third solo album, Blue Valentine, is recorded live at Ronnie Scott’s in September, and features five of her own compositions and songs by Sting, Tom Waits, Sade and Jimi Hendrix.  She appears in (and writes the score for) the short Channel Four film, Expecting,which examines the dilemma of an unwanted pregnancy. Seven months pregnant herself, Sarah Jane performs in the musical, Blues in the Night.

1995
She gives birth to a son, Otis Jack, on 3rd February.  Blue Valentine is released, and becomes the label’s biggest selling album. She presents a five-part jazz series for BBC Radio 3 and performs at the concert, ‘What Women Want’ with Sinead O’Connor and Chrissy Hynde.  Sarah Jane tours Europe again, and then moves her family to the country.

1996
She gives oustanding performances of Weill’s music in Liverpool and Preston with the Royal Liverpool Philharmonic Orchestra and tours England and Europe.

The rest of the year is spent writing new material for her next album.

Sarah Jane travels to New York to begin the first part of recording Sprawl with Mike Thorne.  It’s into the sandpit for both of them.  Much fun is had at the start of some fine recordings, which are eventually released in 1999.

Sarah Jane coproduces her fourth solo album with engineer Rod Beale in his 24-track studio in Portobello Road.  Sarah Jane’s father dies on the first day of recording, the tragedy of which fuels the passion and anger on the album Fallen Angel.  Mixing is done in December while Sarah Jane and her band headline at Ronnie Scott’s club.

1998
In February, Sarah Jane comes back out to New York to finish her part in the Mike Thorne project, Sprawl.  She also meets up with fellow musician and friend Mark Ribot who guested on her album Fallen Angel.

Sarah Jane tries to keep sane through grief counseling for the loss of her father.   A brief operation in June keeps Sarah Jane in bed for a month, and requires her doing an Italian tour in a wheelchair.

Sarah Jane’s album Fallen Angel is released in October in Japan and Europe.