They are talented. They are perfectionists. They are closet comedians. They are nuts. The Marx Brothers without dialogue or Equity cards… Let me tell you, these boys can rock ‘n roll. 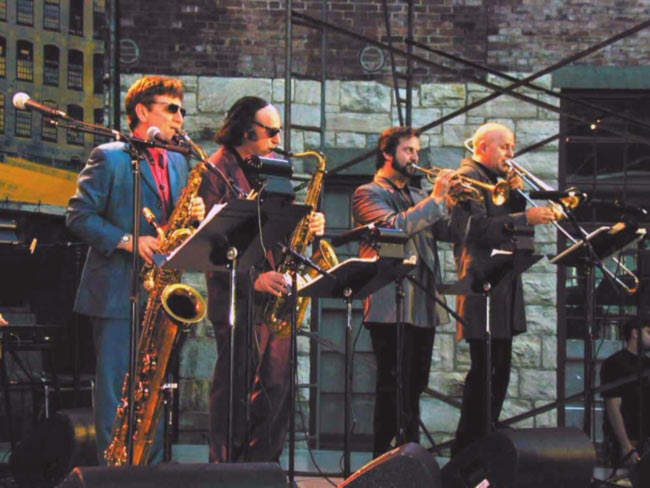 Listen to the Uptown Horns on Thorne‘s albums:  Sprawl and The Contessa’s Party

The Uptown Horns are:

Bob Funk was trained classically by his father, a professional violinist with the Colorado Symphony Orchestra and a variety of teachers ranging from his Cheyenne Mountain High School, the University of Denver under Tasso Harris, the prestigious Interlochen National Music Camp and the Aspen Music Festival before coming to NY to study at The Julliard School and the New School for Social Research. Before, during and after college, Funk was one of the youngest members of the Colorado Springs Symphony, the Colorado Brass Quintet, the Aspen Festival and Chamber Orchestras. He also participated in regional performance groups in Colorado and the Western united States including the Ophelia Swing band at the Aspen & Telluride Jazz festivals and The Orchestra of Clouds in Boulder, CO.

“My father was really my greatest influence,” comments Funk. “We would attend all the jazz concerts that came to Colorado: Duke Ellington, Jack Teagarden, Count Basie, Miles Davis, JJ Johnson. Later on I would see Cream, Willie Nelson and Boz Scaggs, too. We were a real musical family: my Dad on violin, my mom on Piano and my younger brothers on sax and clarinet. We always joked about how Sundays are for Mozart and Miles Davis.” A major inspiration was sitting in with Willie Dixon and the Mothers of Invention band. “I was surprised Dixon would even let me, I was such a kid, that really changed my life.” Another key influence was Dr. Per Brevig, principal trombonist with the NY Metropolitan Opera and a professor at Julliard.

After graduating, Funk joined the Mozart Opera Orchestra, and appeared on the Donald Fagan-produced original soundtrack album of the Broadway hit, “Gospel at Colonus.” He also performed in productions for the Houston Grand Opera and the Brooklyn Academy of Music.

During the mid-70s, Funk went to Los Angeles to join the band, Bazuka. “They were a one-hit band, but at least it was top ten!” Their song “Dyno-mite!” taken from the then popular TV sitcom star Jimmie Walker afforded them the opportunity to tour the country opening for acts Al Green, the Ohio Players, and the Average White Band. “It was a great experience,” remembers Funk. Drawn to NY after exhausting every festival and musical outlet in Colorado, Funk met Cioe, Hecht and Litteral trio at Max’s Kansas City, and the rest, as they say, is history. 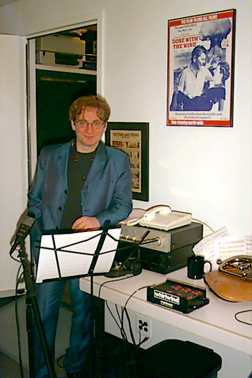 Crispin Cioe (pronounced See-o) grew up in Chicago near legendary Maxwell Street, an outdoor mall which attracted late night impromptu jam sessions by Blues greats ranging from Muddy Waters to Willie Dixon. After a brief year in New York City, his family moved to Motor City. “In the early ’60s, Detroit was a center of rock ‘n roll My dad worked at one of the top ‘rock’ stations, and I would spend hours looking through their record collections and hanging out in the studio while the deejays were spinning. One of the jocks also had an ‘American Bandstand’ type of TV show that I would hang out at with my friends.” 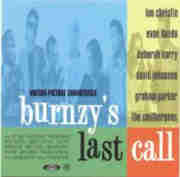 “I knew I always wanted to be a writer, so I studied journalism at the University of Michigan/Ann Arbor. After my third year of college I realized what I really wanted to do and quit with only one semester left. I spent my money on a sax and music studies at Wayne State and the Berklee College of Music in Boston. When I ran out of cash I moved back home and joined a soul band called Radio King & His Court of Rhythm.” More…Burnzy’s Last Call is a feature film airing repeatedly this year on the Sundance Channel.As the film´s composer, Crispin created a full playlist of imaginary hits by fictional one-hit wonders. In doing so, Crispin convinced some very famous singers and musicians to write songs and perform — not as themselves, but as artists from the a parallel universe.

4. WHAT WILL I DO WITH MY HEART
Performed by the Boleros (Dennis Diken & Pete DiBella)
(Diken/DiBelia) Donnaelaine Music, BMI

12. I WANT TO BE AT MY OWN FUNERAL
Performed by Louie “Segundo” Due (David Johansen)
(Gilmore/Johansen) Buster Poindexter Inc, Crispin Music, BMI 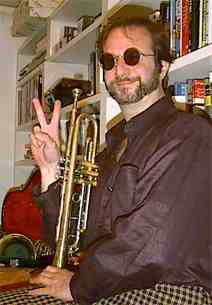 Larry Etkin was a friend and fan of The Uptown Horns for nearly ten years. But even before this, Etkin and Funk met at the prestigious Interlochen National Music Camp when they were in junior high school. “I knew Bob,” laughs Etkin about Funk’s clean-shaven head, “when he had dandruff.” Etkin was also the best man at Paul Litteral’s wedding and was often asked to sub for Paul and/or supplement the groups with a second trumpet. He was the natural choice to replace Litteral.

Etkin was born in NYC and at age 6 moved to a house filled with music in Larchmont, NY. His mother was an opera singer with the Philadelphia Opera Company while his sister is a cellist with the Maggio Musicale in Florence, Italy. He graduated from Brown with a BA and studied at Juilliard under William Vachianno, the first trumpet in the NY Philharmonic, and session player Ray Crisara. After college, Etkin freelanced, performing and recording with groups ranging from the O’Jays (Family Reunion arena tour) to Billy Joel (Innocent Man tour). “My biggest memory was the O’Jays refused to fly, so we lived on these tour buses for months and months. Here I was the only white guy straight out of an Ivy League college, with these gun-toting Superflys. It was quite an experience … the music made it fun.”

Etkin moved to Los Angeles for three years doing session work for records and television (including Sunday morning cartoons). Having his fill of tofu and bean sprouts, Etkin returned to New York and non-stop work doing jingles, Broadway shows, and sessions ranging from Buster Poindexter to Peter Allen, Louis Bellson’s Big Band to Buddy Rich. He performed under the batons of conductors Eugene Ormandy (Philadelphia Orchestra), James Levine (Metropolitan Opera), and Pierre Boulez (NY Philharmonic). Etkin was enlisted to supplement The Horns on the James Brown “Gravity” LP and “Living in America” LPs, and joined them in performance with Joe Cocker. “Being on my own for so many years as a freelancer, it’s great to be a part of this first-class musical family,” admits Etkin. “These guys are, quite simply, just the best!”

New Yorker Arno Hecht has been in bands since age 13. A history major at Columbia University, Hecht earned his way through college playing in various rock groups. After college, Hecht tried a “real life” job before returning to his musical roots. After playing in numerous bar bands, he joined a new wave group, Brend and the Realtones. He recalls, “Brenda had been in a couple of Warhol films so these 6’5” transvestites in leather mini skirts would show up at her gigs. It was very surreal. But what a band! Later on, I brought in Paul Litteral and sometimes Crispin Cioe whom I met at a gig at Max’s Kansas City, he was the only person I’ve ever met who knew all the lyrics to the Coasters’ song “Shopping for Clothes.” All in all, it was a very cool group.” 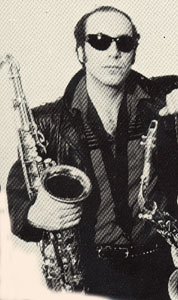 During this period, Hecht was studying “Uptown” with “dean of arranging” Don Sebesky while jamming with a bunch of Horn players at the Lynne Oliver “jazz workshop and finishing school” on West 90th Street. “I had this dream to create The Uptown Horns but the horns kept leaving to pursue their own gigs,” he remembers. When Brenda got caught up in the “scene” and not the music, the Realtones left to work as a separate entity backing up top R&B acts such as Rufus Thomas, Carla Thomas, Don Covay and Solomon Burke.

In 1980, Hecht and Litteral left the Realtones to play with a “punk soul” band called the Nitecaps. One night after a gig, Iggy Pop offered the trio a session if they could find a trombone player. Funk was enlisted and soon all four were jamming as one horn section.

Not long afterwards, the newly sworn-in members of The Uptown Horns began a weekly jam at Tramps with visiting dignitaries ranging from Southside Johnny to David Johansen. Their Uptown Horns Party continued for almost two years. The party was over when J Geils Band keyboardist/producer Seth Justman and managers stopped by Tramps to enlist the horn section for their “Freezeframe” album and 1982 world tour. 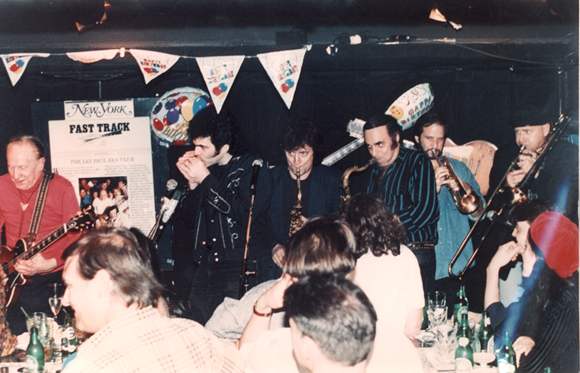 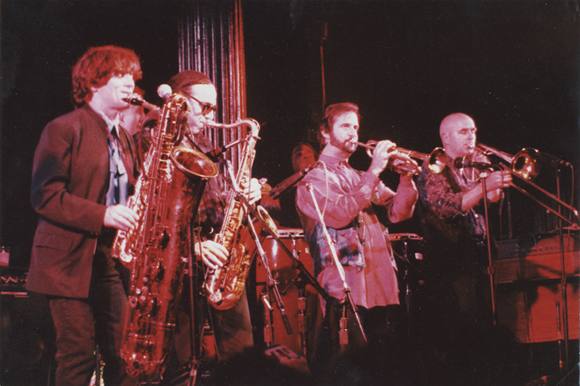 The Uptown Horns Revue, October 1994, at the Bottom Line, New York City. Just after the release of their second album.
photo: Liz Knight 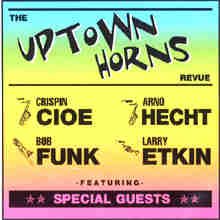 Produced by the Uptown Horns and engineered by Carl Beatty
This album is dedicated to the memory of the great Albert Collins.

The Uptown Horn Band: A Shot In The Dark
© 1987 Roadside Records