Soft Cell was formed in 1980 by Marc Almond and Dave Ball when they were at art college together in Leeds, England. Their prime stage prop was a padded ‘soft cell’, which took more carting around than their electronic instruments and tape recorder. They were ‘discovered’ at a punk-electronic music festival and signed to Stevo’s label Some Bizzare.

Daniel Miller, of the classic early electronic pop warm Leatherette and later to found the influential Mute Records, produced a fine and groundbreaking Memorabilia. Sale of the label to Phonogram found them with a single to do: Tainted Love. They were introduced to Mike Thorne, and started a relationship spanning three prominent albums and five consecutive UK top five singles. After splitting with Thorne, they made one album, This Last Night in Sodom, before quietly disbanding in 1984.

Solo projects followed. Marc was most active with Marc and the Mambas, Dave with The Grid. They reformed Soft Cell in October 2002 and have toured and recorded since, in addition to releasing solo work.

There are many articles on Soft Cell and Marc Almond at the Stereo Society, all about Thorne’s production experiences with them. Not all were fun experiences, but lessons were learned. 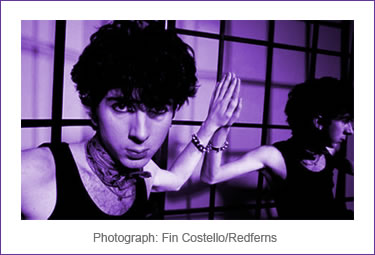 Soft Cell: Tainted Love
1981, UK single
This song, a hit for Gloria Jones in the sixties, was clearly a strong one in some people’s minds, since she re-recorded it in 1975, on her EMI album Vixen, co-produced with Marc Bolan just before the late-night car accident on Barnes Common, in West London, that killed him.  By the late seventies, it had became a club staple on the English ‘northern soul’ circuit…..

Soft Cell: Non Stop Ecstatic Dancing
1982, UK album
We had scored three consecutive top-five singles in the UK, and Tainted Love was so in demand and so over-used that some New York club Djs would be playing the UK 45rpm single at 33 1/3 in a desperate attempt to find a new angle.  (US extended 12” singles were generally cut at 33, UK at 45, so this probably first happened as an enlightened mistake…..

Soft Cell: Torch
1982, UK single
In a pleasantly unguarded moment many years later, while working on Fantastic Star, Marc Almond and I would agree that Torch was the best single of the many tracks we made together in the intense and creatively productive period that included Soft Cell’s first two albums. The dominant A side of what was intended to be a double-A side, brings together…..

Soft Cell: The Art Of Falling Apart
1983, UK album
Not knowing exactly when the phrase was coined, I’d guess that the title of the double album probably wasn’t invented until late in the recordings.  But Soft Cell continued their uncanny knack of delivering songs and sounds which mirrored their current mental and psychological state.

Marc Almond: Fantastic Star
1994, UK album
We all need regular reality checks, like yearly visits to the dentist. When you’re flying, you have to remember where down is. In that spirit