The Plasmatics at CBGB 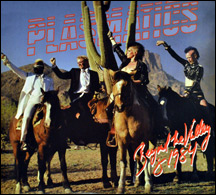 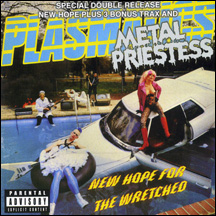 Living Dead (from Metal Priestess, New Hope For The Wretched, 1980)

There’s a schism between the impact of recorded music and that of the performer on stage.  It goes both ways – the dull, whining guy in T shirt and scruffy jeans might not come across from the badly-lit stage mic, but could have serious songs saying something and might even make a good record.

On the other side of the sensitive divide were the Plasmatics.  They were about combined media, before it became an obvious route: power theater.  And with a combined message.  Take the headlong music out of their action, and it loses some support.  Isolate the music on disk, and you might sometimes find it wanting.  But the combination on a noisy night was so powerful, and a year after the release of their first album they were playing to full houses at the Palladium on 14th Street.  CBGB was their New York launch pad, though.

by The Plasmatics | Beyond The Valley of 1984

To check out or buy at Amazon, click here

The music didn’t always hit the conventional recorded heights, but the Plasmatics and their unforgettable front person Wendy O Williams had serious attitude, and it communicated so well in the club: a formidable combination of confrontation and politics.  You always had to watch where you were standing for the finale when they took a chainsaw to the wired guitar on stage, and not just up front.  Scattered around the back of the club were horns which relayed one of the most excruciating sounds ever heard there.  And they had serious competition, from less obviously aggressive machines.  (The band would graduate later to blowing up a Cadillac on stage at the Palladium.)  These uncompromising radicals made a very coherent and powerful mark, in contrast with some destructively misguided East Village anarchists (Missing Foundation) that Hilly banned after they set a fire on the stage as a ‘political’ gesture during their performance. The Plasmatics were new and had something to say. And were not afraid.

by The Plasmatics | Metal Priestess

To check out or buy at Amazon, click here